LOS CABOS, Mexico - Far from the bikini-lined beaches and booze-fuelled bars of Cabo San Lucas, I lie elbow deep on the sand of some remote Mexican dunes waiting for the sun to near the horizon, a growing nursery of baby turtles squirming beside me. 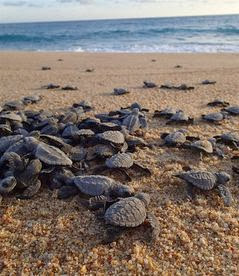 It's September, the hottest and most humid month of the year on the tip of the Baja Peninsula, and while it may be enough to melt this pasty white Canadian, it's perfect weather for my little companions.
August is the start of turtle hatching season on the Baja, and for the next five months over-hydrated tourists won't be the only things crawling along the sandy beaches of the Pacific and the Sea of Cortez.
Five species of sea turtle nest on the peninsula, some crossing the ocean from as far away as Japan to return to their breeding grounds: Olive Ridley, green, loggerhead, leatherback and hawksbill turtles.
There are only seven species of sea turtles total, and six of them are considered endangered, the most endangered being leatherbacks, the prehistoric behemoths that can weigh more than 450 kilograms. These are relatively tiny Olive Ridleys squirming in my hand.
Beside me, Paula Dyke, of St. John's, NL, has hit the mother lode of turtles in her nest, in the end piling about 60 into a penned enclosure to be safely shepherded across the dunes to the oceanfront.
Like me, Dyke had no idea what to expect from the turtle conservation tour, but found herself stepping into the shoes of marine biologists.
In the penned nursery, turtle eggs collected by biologists earlier in the year had been reburied, each in a nest ringed with netting to keep the hatchlings from making a solo escape. Nearby, the marine biologist crew lives in a trailer for the duration to keep an eye out for poachers or predators.
Dyke and the others in our small, off-season group were shown how to dig down into hatching nests and gently help the turtles into the fading light of day.
"When I pulled the first turtle out of the nest and brushed the sand of its shell, I thought nothing about the evening would top that. I was wrong. Apparently, my nest was like the mother lode – over the next 20-30 minutes I dug handfuls of turtles out of the sand," she said.
"It was crazy. I felt like a proud parent looking at my babies."
The group, directed by biologists, then took the turtles from the nursery close to the water line, where they were put on the sand to make their way — under watch — to the ocean.
"The waves on that coast are huge, and as soon as the turtles got wet it was as if some primal instinct kicked them into overdrive and they started racing toward the ocean, fearless and ready for whatever was in front of them," Dyke said.
"It was peaceful and humbling, standing there, watching those tiny little turtles rush forward into the vastness of the Pacific. Definitely one of those moments of a lifetime."
The odds of survival are one in a thousand for every egg laid, but those odds are improving thanks in part to conservation efforts that began more than a decade ago with local fishermen.
The dangers at sea include accidental capture and entanglement in fishing gear, ocean pollution and predators. On land, turtles have lost much of their nesting and feeding habitat to development, they face more pollution and they are hunted for food, coveted in several cultures as an exotic or medicinal product.
Sea turtles spend their lives in the ocean, with the exception of females that come ashore to lay eggs every 2 to 5 years.
The tour companies offering turtle tours say the industry provides an alternative to fishing, and support conservation. They also raise awareness both among locals and tourists.
Today, fishermen in the region take measures to avoid bycatch and most hotels take steps to protect or have biologists relocate turtle nests until they hatch.
Few of the turtles we released will live long enough to return, but they now have at least four more fans on their side.
---
If you go:Learn about turtles before you go: http://ocean.si.edu/category/sea-turtles