SCORE has shortened the course a bit from initial reports with total mileage of the loop that starts and finishes in Ensenada now about 833, though it’ll still start for bikes and ATVs at 11:00 P.M. on Thursday, November 14, with qualifying for start position taking place the day before.
Unlike the Baja 500, the Bonanza Plumbing/FMF KTM factory team will pin its hopes on just one squad: Mike Brown, Kurt Caselli, Ivan Ramirez and–get this–Kendall Norman! 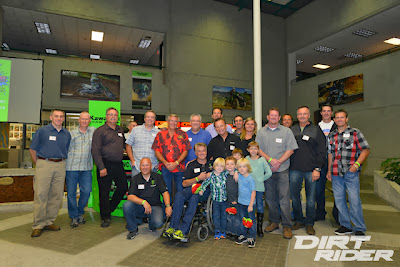 The JCR Honda team is the defending race and series champ, of course, and will rely on those three once again. Then there’s the THR Motorsports/Monster Energy/Precision Concepts Kawasaki-mounted unit of Robby Bell/Steve Hengeveld/David Pearson/Taylor Robert that should also be right there, with hints brewing of a mystery rider possessing a supercross background being added to that group.

In what’s often considered a tune-up for the 1000, all three teams raced the John Burr Cycles 24 Hours of Glen Helen last week with modified rider line-ups, mostly to make sure their lighting systems are up to par. JCR Honda added Ryan Dudek to the mix, Mike Brown rode as part of ZipTy Racing/Bonanza Plumbing KTM with Ty Davis/Bobby Garrison/Gary Sutherlin and THR’s Robby Bell teamed up with Chris Hollis (who was on his way back to Australia after being part of the Aussie World Trophy team at Six Days) plus Ty Renshaw and Justin Seeds.
Honda clawed its way back from an early mechanical setback to sprint past Kawasaki in the final hours for the win by just a minute and 34 seconds, unofficially. Purvines Racing Beta’s Ryan Abbatoye/Nick Burson/Max Gerston/Justin Morrow/Jason Parsons/Tallon Taylor claimed the Open Expert win and third overall while KTM was fourth.

Speaking of 24-hour races, probably the biggest one around is the 24 Hours of Starvation Ridge up in Washington state with nearly 100 teams/entries fairly average. The course is more open and flowy than the confines of Glen Helen, taking full advantage of the eastern Washington venue.

For the second year in a row (and third time in the past four years), the MotoSport Hillsboro KTM team took the overall, this year comprised of returnees Reid Brown, Don Boesphlug and Monte McGrath plus newcomers Dan Jordan, Joey Lancaster and Irving Powers.

Getting back to Baja, Kawasaki Team Green owned the peninsula during its run. It started its streak by winning the 1987 Baja 500 in its first foray to Mexico, but it really got going the following year and continued to dominate until finally withdrawing after winning the 1000 in 1996 for the ninth consecutive time.

Many of the people involved with the effort are still around, though they may no longer be at Kawasaki. But much like a high school reunion, getting everyone together can be a lot of fun and that’s what happened on Saturday night at Kawasaki’s corporate offices in Irvine, California: the Kawasaki Team Green Baja Reunion.

Over 160 former riders, support staff and volunteers (and their families and friends) gathered for a lot of bench-racing, a taco feed, the chance to view lots of old photos, T-shirts and other memorabilia, and just getting together with friends old and new, some of whom hadn’t seen each other in 20 years or more.
Among the riders were Anna Cody, Chris Crandall, Ty Davis, Ted Hunnicutt, Paul Krause, Danny LaPorte, Dave Ondas, Kenny Parry, Larry Roeseler and Garth Sweetland. Team manager Mark Johnson also made it as well as many of the techs who built and cared for the all-conquering KX500s, 250s and 125s, plus Pro Circuit’s Mitch Payton and Jim “Bones” Bacon who were instrumental in the effort as well.

While the KX500 that won the 1994 Baja 1000 was also on display (complete with its imposing trio of quartz-halogen lights), the evening was mostly about remembering the people who made it all possible. Despite many years not seeing each other, it seemed that old friendships were instantly renewed, with everyone marveling it had been 25 years since that first Baja 1000 victory. As the evening wound down, guests took the mike and shared anecdotes of what they remembered, some of the accounts probably being told in public for the first time.

As Cody said in a Facebook post, “It was a great evening seeing everyone after so many years and hearing stories in the company of some very fast racers…as well as the mechanics and the men behind the team.”
Right after the OiLibya Rally of Morocco, Team HRC Rally sent two of its riders to the Merzouga Rally (handily, also in Morocco) for additional seat/testing time. Since it’s not a part of the FIM Cross-country Rallies World Championship, it’s not attended by many top teams, but the team felt it wouldn’t hurt to have Helder Rodrigues and Sam Sunderland participating to further develop the brand-new CRF450 Rally that proved so dominant last week.

It again proved to be an excellent week for both riders and their new bikes; they won four stages over the next five days and ended up going 1-2 with Sunderland topping the final day and the overall, Rodrigues a strong second after a navigating error on the third day.

That’ll be the final race for the team before Dakar and the expected showdown with the Red Bull KTM Factory Rally Team’s Kurt Caselli, Marc Coma, Ruben Faria and Francisco Lopez. —Mark Kariya

450 Class
• Two Heat races with four transferring from each heat
• Two Semis with five transferring from each semi
• One LCQ with two transferring from that
• Main Event total of 22 riders with last place getting one point
Riders that don’t qualify for the Main event out of the heat race will go to the Semi but the Semis will be based on finish. Odd riders going to one Semi with evens going to another. This means that if a rider is in Heat one and doesn’t qualify that doesn’t guarantee him to get Semi number one.

250 Class
The 250 class will feature the usual format for the heat races (nine out of each heat) but will take four out of the LCQ for a total of 22 riders on the gate. Last in the Main Event will get one point.
We here at Dirt Rider like this change (if it happens) because it gives riders more TV time that usually wouldn’t get any and lets fans see more races on any given Saturday night. —Kris Keefer