It was only a few years ago when the world's biggest waves were found at places like Cortes Bank, off the coast of Baja, Ghost Tree in Northern California and Mavericks south of San Francisco. 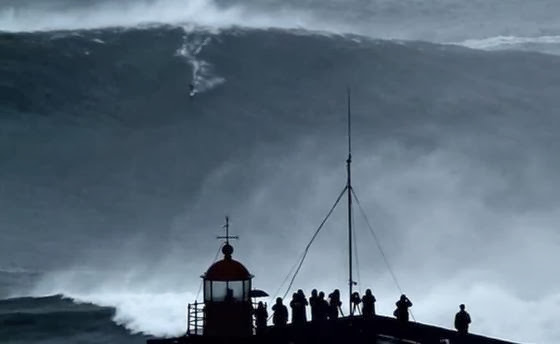 In other words, West Coast winters often rule the world of big-wave surfing. Now a beach called Nazaré in Portugal is simply dominating the sport, and there might just be a new record wave ride:


On Monday Brazil's Carlos Burle got towed into a monster that some are calling 100 feet, which could set a new biggest-wave-ridden record.
Burle actually gets swallowed by the whitewater after making the drop. He told Stab magazine:

It looks like it might be one of the biggest ever. I don't want to be the one who calls it. It's hard to tell. Someone else can tell me how big it was.

It was a momentous day. Burle is credited with helping to rescue fellow Brazilian Maya Gabeira after she pearled, was held down and floated to the surface unconscious. She's alive.
Garrett McNamara is said to be the current record holder with a 78-foot drop at Nazaré in 2011. He decided not to go out Monday because, he said, it looked too dangerous.
The waves of Nazaré are unique because they're created by a 125 mile offshore canyon that goes from three miles deep to just feet, producing explosive surf that was previously thought to be unridable.