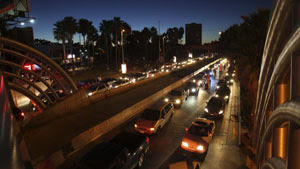 Lines of northbound cars wait to enter the United States at the San Ysidro Port of Entry. - John Gibbins

A U.S. House of Representatives bill that would establish a grant program for infrastructure improvements at existing and future border crossings, including San Ysidro and Otay Mesa, has been receiving applause in San Diego.

"The practical idea is to provide support for infrastructure at the busiest land ports," Peters said. If the grant program becomes a reality, "we're pretty optimistic that San Ysidro would qualify."

He presented his proposal last week to participants in the San Diego Regional Chamber of Commerce's "One Region One Voice" advocacy trip to Washington, D.C. The House bill builds on the wording of an amendment to the Comprehensive Immigration Reform bill presented this year by Sen. Dianne Feinstein, D-Calif.

"The premise is that if you're going to secure the border, how do you make the legitimate border crossings more efficient?" said Gary Gallegos, executive director of the San Diego Association of Governments and a member of the delegation, along with chamber CEO Jerry Sanders and San Diego interim Mayor Todd Gloria.

The grant proposal comes amid concerns about funds needed to complete the $732 million expansion of the San Ysidro port of entry. Congress approved that project, but has funded only the first phase of $292 million. The Obama administration apportioned $226 million more in its spending request for fiscal 2014, which is awaiting approval.