TIJUANA – The problems plaguing the U.S.-Mexico border can be solved, with young people from both countries leading the way.

That’s the message of a two-day conference Tijuana is hosting that’s brought together 200 accomplished college students from northern Mexico and California. It’s called “Jornadas Fronterizas / Border Workshops,” concluding Friday at the Grand Hotel.
It’s organized by a non-profit organization based in Mexico City, known as EVAC, and supported by the giant Mexican TV network Televisa. The goal is to offer a space where college students can meet politicians, industry leaders and academics -- as well as other young leaders – analyze community problems and propose solutions.
The conference consists of round-table discussions that tackle a subject, such as immigration, education, security, innovation, employment and art.
The students who are participating were selected because of their academic achievements and their proposals to solve a problem on the border.
During one of the sessions Thursday, called “Error in the Operating System: Failed Education,” about 20 students complained about the poor public education in Mexico. This system has produced an estimated 7.2 million so called “ninis,” young people who neither work nor study, the students said.
Instead of government investing in education, its leaders have invested in security and the fight against the drug cartels, some said.
Other young people countered, however, that even though Mexico’s northern states had the greatest problems with violence, their students had the best scores in international academic tests.
Some students spoke about the government neglect of schools on the cities’ geographic edge in favor of those in the center, particularly elementary education, and about students graduating with few prospects for a job.
“We should take the reins of education, since all of us have a stake in it. Parents have to push their children to get an education,” said Fernanda Armendáriz, 22, a student of Universidad Regiomontana.
She presented a proposal to make museums in Mexico free and to use them in coordination with schools to make learning more dynamic.
For his part, Ricardo Rodríguez, 26, a student at the Universidad Autónoma de Baja California and a member of the Collectivo H2L, said that he and fellow members are using rap, graffiti and other urban expressions to raise awareness of community problems.
Thursday’s sessions included workshops such as “Walls We See, Neighbors We Don’t,” about immigration, “Gambling on life” (security), “¿Maquilotitlán o Tecnópolis?”, about innovation.
The idea was to discuss the problems that young people identified in their region without necessarily assigning blame. Based on that, the young people were to propose possible solutions and specific projects, said Raúl Tadeo Ruiz, who coordinated the workshops that tackled immigration.
Ruiz, 24, said he works for two community groups in Hermosillo, Sonora, that help the disabled and homeless migrants.
According to the event’s director, Gastón Tadeo Melo, the communities that live along the U.S.-Mexico border have suffered greatly because of the war on the drug cartels and internal battles among the organized criminals.
But that crisis offers a great opportunity to make young people a part of the solution, since many of them know firsthand its damaging effects.
Twenty young people will be selected from this conference to present their projects in a summit in Washington, D.C., called Vanguardia Latina, where they will get a chance to meet national and international leaders, and continue the conversation about solving the region’s problems.
at 10:16 AM No comments:

TIJUANA — In an action aimed at increasing the competitiveness of the Baja California region, President Felipe Calderón came to Tijuana on Friday and launched the Strategic Economic Zone by eliminating import duties on 200 products. 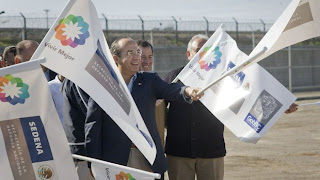 The move comes after years of clamor from the state’s business and political leaders. They have argued that Baja California businesses lose many Mexican consumers who are enticed across the border to stores with greater variety and lower prices.
“This will allow Mexican businesses to offer imported products at much more attractive prices, and this way we will fortify economic activity and generate more jobs for our people,” Calderón said during an outdoor ceremony held just yards from the San Ysidro border crossing.
The measures were outlined in the “Decree for the Competitivity and the Reduction of Tariffs of the Border Economic Zone,” signed by Calderón before the state’s top political and business leaders, including Gov. José Guadalupe Osuna Millán and Tijuana Mayor Carlos Bustamante.
The decree comes a month after the Mexican federal government slashed its high tariffs on 204 Chinese products. While the dropping of that trade barrier applies across Mexico, Friday’s decree is restricted to the states of Baja California, Baja California Sur and a portion of the state of Sonora.
Together, the actions will lead to lower prices for a range of goods including clothing, shoes, canned fish and wine, Calderón said.
With creation of the new zone, “we now have an instrument to help us combat the flight of consumers that has afflicted us so strongly,” said Mario Escobedo Carignan, leader of a powerful umbrella group in Tijuana, the Business Coordinating Council. “What we hope is that they can find products here at the same price that they can find in the United States.”
Escobedo said Friday’s decree is only the first step toward increasing the region’s competitive strength. Future steps for the zone would include federal and state funds for businesses that bring new technologies to Baja California, as well tax breaks for key sectors such as aerospace and biotech, he said.
Business and political leaders in Baja California have been lobbying the federal government to establish the special zone, saying conditions at the border are far different than those in central Mexico, where shoppers don’t have the option of crossing into the United States. They had met with stiff opposition from business groups in central Mexico.
“For the president of Mexico to do this in face of huge political interests in other parts of Mexico is a big deal,” said Christina Luhn, director of the Mega-Region Initiative for the San Diego Regional Economic Development Corporation.
Surveys by the San Diego-based Crossborder Group Inc., a market research firm, have shown that Baja California consumers who shop in San Diego County typically buy goods such as clothing, shoes and electronics. Kenn Morris, the group’s president and CEO, said shoppers spend about $200 million to $250 million a month in retail stores of San Diego and Imperial counties.
While the lifting of tariffs and import duties is likely to encourage more Baja California residents to shop in Mexico, it is not likely to eliminate cross-border commerce, analysts said.
“They’re not going to quit coming across the border, because they don’t have the variety of things and the same shopping experience,” Luhn said.
Martín Ramírez Urquidy, head of the economics department at the Autonomous University of Baja California in Tijuana, estimates that the new measures will lead to 8 percent to 10 percent less demand for products in the U.S. among Mexicans in the region.
at 10:40 AM No comments: