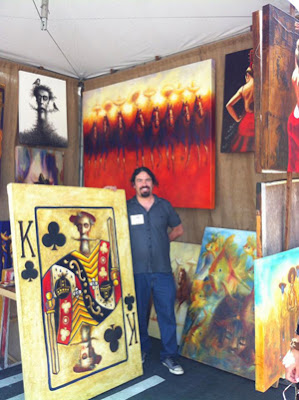 Benito del Aguila, director general of the Rosarito Art Fest, has the pleasure of announcing that Rosarito artist David Silvah has been invited to exhibit at two early October shows in Spain, one in Barcelona and one in Valencia. Mr. Silvah will be accompanied by Tijuana artists, Nuria Benitez and Antonio Proa, both of whom exhibit at his Baja Gallery in Rosarito and maintain an additional presence in Rosarito as exhibitors at the Rosarito Art Fest.

David Silvah, known in Mexico for his commercial success with motifs of Mexican heroes and iconoclastic Mexican themes, categorizes himself as self taught. Research he did as he developed his style goes deep, back to Caravaggio, an Italian painter, circa 1600, who developed a technique of sharply shifting from light to dark; William Turner, the British Victorian-Edwardian era painter also known for interesting techniques with light and for his historical place as one of the founding father's of Modernism and to David Alfaro Siqueiros, who along with Diego Rivera and Jose Clemente Orozco, anchored the Mexican Muralism tradition, the artistic response to the first social revolution of the 20th century, the Mexican Revolution.

Young as he is, David Silvah and his art have come a long ways. David's memory of his first drawing, at age 14, was of Rocky Balboa with the face, not of Sylvester Stallone, but of a personal friend.

When I asked, "If not a painter, then what?" David responded, "A singer." Hummm. Has anyone heard him sing? Best guess ..... he's really, really good.

Complementary yet controversial; old and new worlds meeting in symmetry have been descriptions in other articles penned about David's art. His fellow artists say that he is the best among them at translating los tres grandes (the big three), Diego Rivera, Jose Clemente Orozco and David Alfaro Siqueiros into contemporary language.

They further complement David by saying that he handles artistic detail as masterfully as he manages attention to light and color.

David will be back in his studio at the Baja Gallery in front of the Rosarito Beach Hotel by mid October. Several of his pieces will remain on display at Baja Gallery while he is gone. Stop by before he leaves on October 2nd and wish him well.

David would particularly like to see you Saturday the 28th and Sunday the 29th when he, Nuria Benitez and Antonio Proa will be offering pieces at greatly reduced prices to help cover the final expenses of the trip.