I found Jack Kerouac’s Mexico on a strip of beach that separated the old hotels from the heaving Pacific, at a bar near where he sat on the sea wall and watched the sunset 61 years ago. 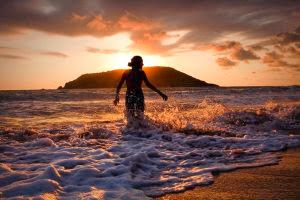 My best friends in Mazatlán, whom I had met only a day earlier, were behind me arguing and laughing. But with a beer in hand and my own perfect view of daylight’s final yawn, I was too blissed out to talk.
That moment was the closest I got to channeling the Beat Generation writer on my journey inspired by Kerouac’s 1952 bus trip from the Arizona border to Mexico City. The scene before me called to mind the Mazatlán he described to Allen Ginsberg: “hot and flat right on the surf, no tourists whatever, the wonder spot of the Mexicos really but nobody hardly knows, a dusty crazy wild city on beautiful Acapulco surfs.”
Still, I wondered, how much did Kerouac’s romantic vision match up with reality?
Mazatlán is one of the many places that the Beats used to bolster the idea of Mexico as the destination for debauched recreation and self-discovery. Kerouac and William S. Burroughs, who moved to Mexico City in 1949 to avoid a drug charge in New Orleans, laid down in literature a charmingly simple notion of the country that has endured.
Kerouac was a mythmaker in many respects. His writing turned struggling friends into epic heroes, and persuaded many youthful vagabonds (my former self included) to go now, to find saints among the sinners. Along the way, he created an impression that he and his ilk were not tourists, but rather ideal American travelers, engaged and sensitive, “desirous of everything at the same time,” as he wrote in “On the Road.”
Even now, as a correspondent here since 2010, I often see links between the idyllic American fantasy and Mexico’s most obvious failures (security) and triumphs (contemporary art). But Kerouac was a pioneer. And as a follower, I wanted to see where he went right or wrong, and what had changed since he helped define Mexico for millions of readers. Following the route from Mazatlán to Mexico City, I hoped to figure out if his dreamy vision could still be found, even as I confronted some of the cold, hard tragedies that many Americans miss.
My newfound friends in Mazatlán, Dr. Juan Fernando Barraza and Victor Coppel, were among the many who disagreed on whether Mazatlán’s rapid growth from the ‘60s through the ‘80s changed the city for the better. Sinaloa, the state where Mazatlán is, was already a major source of marijuana in the United States by Kerouac’s time – a detail he had to know – but as American drug use increased in the decades that followed, Barraza said the easy money and the influence of American partyers gradually pushed Mazatlán from its simple roots.
“We haven’t copied the best Americans, but the worst,” said the doctor.
Both of my unofficial guides – relatives of a friend of mine in Los Angeles – did agree on one thing: Mazatlán was facing another moment of reconsideration. This city of 440,000 people now finds itself on the hung-over side of a binge that began around Kerouac’s time, and as with Mexico itself, it is often hard to tell whether the future should be met with optimism or despair.
When Kerouac reached Mexico City at dawn after a long bus ride through Guadalajara, he caught a few hours of sleep in “a criminal’s hovel,” then made his way to Burroughs’ house in La Roma, a turn-of-the-century neighborhood of grand old homes that was starting to slip into disrepair.
My arrival in La Roma could not have been more different. If Mazatlán reflects what can go wrong when American excess mixes with Mexican impunity, La Roma represents what can go right when Mexicans with a taste of the world zero in on a single community.
But corruption was still holding things back. Business owners said permits typically require bribes. To some degree, they argued, not much has changed since corruption helped Burroughs flee a murder charge after he shot and killed his wife during a game of William Tell a few months before Kerouac’s 1952 visit.
But these days, at least in La Roma, there is also a new check on the usual abuse of power. Consider the case of Maximo Bistrot, one of the best restaurants in La Roma. In April, a social media revolt kept government inspectors from shutting it down after the daughter of the head of Mexico’s main consumer protection agency complained about not receiving the table she wanted. Then came an even greater coup: Mexico’s president fired her father, the agency chief.
After eating at the restaurant, I tried to imagine what Kerouac would have made of it. Maybe it depends on which Kerouac we imagine. He was 30 when he took that bus trip, and he was mostly too self-absorbed to see beyond the “frenzy and a dream” that defined his visit in “On the Road.”
But what about Kerouac as an old man? If he hadn’t died from alcoholism in 1969 at age 47, maybe he would have moved to Mexico and tried harder to understand and explain the country.


With more time alive and in Mexico, Kerouac could have been someone that Mexico and the United States still sorely need: a binational conscience. Imagine the trips he could have made, the complicated, multilayered stories he could have told about life on both sides of the border. Imagine the everything.