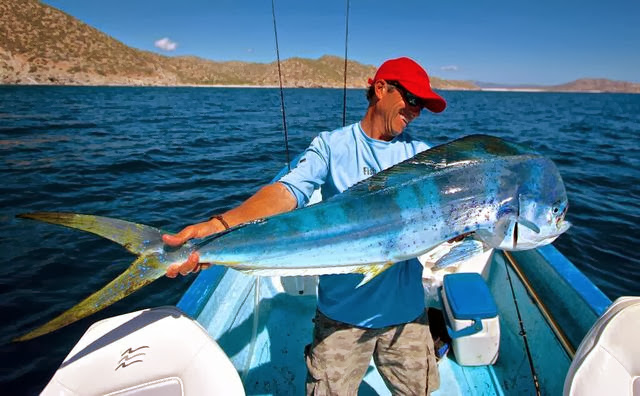 Dorado, or mahi-mahi, are prized by sport anglers because of their acrobatics and the high quality of their flesh.

But they're also amazingly colorful; they typically flash brilliant hues of gold, green and yellow.

Occasionally, though infrequently, they'll turn blue, and Dave Maynard (pictured above) recently caught a handful of dorado that looked as though they were trying to blend with his powder-blue shirt and/or the bottom of hispanga. (Normal-colored dorado pictured below.)

Maynard, host of "Fish the Baja," was fishing out of Rancho de Costa in Baja California Sur. He said his group landed 154 dorado in four days, and at least six were blue.

Trying to find out if this was rare, I asked a few resident Baja outfitters, and received these replies:

Mark Rayor of Jen Wren Sportfishing: "They are an odd fish and turn all sorts of colors.  I don't think blue is that uncommon.  Once in a while we get a silver one that looks really cool."

Eric Brictson of Gordo Banks Pangas: "We have seen dorado have the ability to change their color shade, particularly when aggressively in the feeding mode. Once they have been caught and placed in the fish box their color patterns normally return the darker green color. This photo, though, does appear to show a dorado that is much bluer than you would normally see, though not unprecedented."

Not unprecedented, but very unusual. It could be said, to borrow and old cliche, that blue dorado are only caught once in a blue moon.