Five Reasons To Go To Mexico

There are five reasons to go to Mexico. 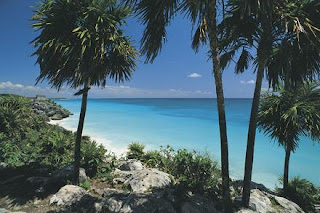 From the rocky beaches of the Pacific coast to the warm waters of the Gulf of Mexico, plus all the quaint pueblos in between, Mexico is a large and diverse country that offers something of interest to nearly every visitor. If you're considering taking a trip to Mexico, you might have several reasons for doing so. Whether you're looking to spend a few peaceful days in a large beachfront resort, or travel through small towns, visiting ancient ruins and sampling the piquant local fare, Mexico is ready to welcome you.

Mexico's coasts attract visitors looking to relax and enjoy a sunny beachfront vacation. Large resorts line many of Mexico's beaches, offering a laid-back getaway to sand- and surf-seeking travelers. Choose from the calm, sandy beaches of the Mexican Riviera that line the Gulf of Mexico, where you can splash in the surf or partake in some snorkeling or jet-skiing, right from the shore. Or, opt for a trip to Mexico's western coast and stay in a resort perched atop the rocky cliffs overlooking the Pacific Ocean, where you can enjoy fishing trips and scuba diving in the deep, cool waters.

Mexican cuisine isn't just about tacos and tamales. Visit the inland cities of Puebla and Oaxaca to sample different varieties of mole, a sauce made with toasted chilies and chocolate. In the coastal regions, sample local seafood dishes, such as snapper Veracruz style, a meal made with whole snapper prepared with tomatoes, chilies and olives. Head down to Baja California to sample Mexico's finest wines and visit the home of the fish taco.

Mexico is an affordable vacation destination. If you'd like an all-inclusive trip, you can save a bundle by scouring the Internet for Mexican vacation packages that include air fare, hotel accommodations and meals. If you're more the backpacking type, you can save money on a Mexican vacation by staying at small inns in some of Mexico's rural towns. Eat where the locals eat, and you'll not only get an up-close view of the local culture, but also you'll save money on food.

Home to strolling mariachis and several world-famous artists, Mexico welcomes visitors looking to immerse themselves in the country's vibrant culture. Find a local nightclub or concert hall in any sizable Mexico city and catch a performance by a rumba or norteno band. Visit the artists' colony of San Miguel de Allende to watch artisans in action as they create their handicrafts. Or head to populous Mexico City to visit art museums filled with work by some of Mexico's finest artists, including Frieda Kahlo and Diego Rivera.

History buffs can step back to the days when the Mayans ruled Mexico. Visit the ruins of two Mayan cities in the Yucatan Peninsula at Tulum and Chichen Itza, and walk among the stone pyramids that once housed some of Mexico's earliest residents.
at 5:17 PM No comments:

Playas de Rosarito, Baja, Mexico -- It doesn’t get much better than this…greatperformances by the best vocal talent from northern Baja and southern California competing for cash prizes, future live in-concert performances,& recording studio opportunities. At this event, sponsored by the Rosarito Beach Hotel in its iconic oceanfront setting, you (and your fellow audience members) will make the crucial decisions as to who will be the five fabulous finalists. 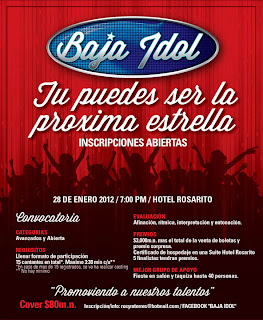 A panel of highly qualified judges:  Bo Bendana, is an accomplished singer song writer.After retiring from a successful modeling carrier she join the girl group ADORE. She was managed by Larry Rudolph who is the current manager of Britney Spears. Bo recorded her first album with the biggest producers in the music industry such STEVE MORALES, GUY ROCHE. Today Bo has placed her music carrier on hold to raise a family. Gil Sperry,a music teacher, local impresario , and author; Elida Rodriguez, a local artist with an extensive musical background; and a surprise international superstar performer who is making a rare special appearance in Rosarito, will then determine the runner-up and our very first ‘Baja Idol’.

Your emcees for the evening’s festivities will be famous Tijuana television host Juan CarlosScolari and the beautiful Claudia Urias, who handled similar duties at the 1st Annual Rosarito Beach International Mariachi & Folkloric Festival. The event will be filmed by the famed cinematographers from Real Art Films….Samuel Paredes Valdespino and Michelle Hinojo…for future videos indication.

‘Baja Idol’ will be held on Saturday evening, January 28, in the Salon Mexicana, the main showroom of the hotel. The doors will open for first come-first served seating at 6:00 PM with the actual competition set to begin at 7:00 PM. Tickets to enjoy all the exciting entertainment are priced at a very reasonable $80mnpesos ($6dlls)each.

A special feature will be an award to the best fan group, as chosen by the judges, of a free ‘taquiza’ party for up to forty people to be held in one of the hotel’s major salons.

This is one event that you won’t want to miss!
at 4:53 PM No comments: