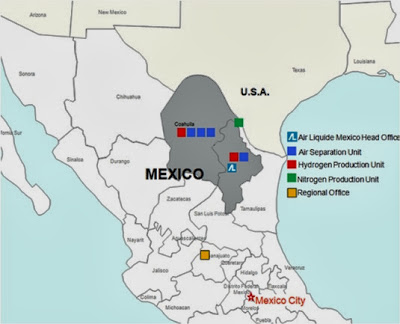 Air Liquide (Paris:AI) continues its rapid growth in Northern Mexico, and today announces new agreements with Altos Hornos de Mexico (AHMSA) for the acquisition of an Air Separation Unit (ASU) and a new investment of more than EUR45 million (approximately 60 million USD) for Air Liquide's construction and operation of another ASU, both located on AHMSA's Monclova, Coahuila, Mexico site.
AHMSA, one of Mexico's largest steel producers, is a fully integrated steel company whose production ranges from raw materials to finished higher value added products. These new agreements follow Air Liquide's recent inauguration this spring of another ASU on the same site in Monclova, Coahuila, located approximately 200 kilometers northwest of Monterrey, Nuevo Leon, Mexico.
The total production capacity of Air Liquide Mexico's 4 ASUs (3 in Monclova, Coahuila and 1 in Pesqueria, Nuevo Leon, Mexico) will reach approximately 3,000 tonnes of oxygen and more than 100 tonnes of argon per day. This will establish Air Liquide as a major source of oxygen in the North of Mexico and the major source of argon in the country.
The three ASUs in Monclova, Coahuila will provide oxygen, nitrogen and argon for AHMSA, while strengthening Air Liquide's supply to other industries and customers in the region, including metal fabrication, oil and gas, automotive, glass, food and beverage, as well as healthcare sectors.
With these new investments, Air Liquide will have invested nearly EUR200 million (approximately 250 million USD) in Mexico by the end of this year, since its entry in the country in 2011, establishing its leading market position in the northern region, as well as its presence and market potential throughout the other regions of the country.
Michael Graff, Senior Vice-President Americas and a member of Air Liquide's Executive Committee commented: "We appreciate AHMSA's confidence and trust in our ability to continue to deliver safe and reliable products to help drive growth and prosperity for industry and citizens throughout Mexico. As the Group remains focused on leading market positions in high potential markets, Mexico and the developing economies of the surrounding region are strategic growth areas for Air Liquide."
Air Liquide in Mexico
In 2011, Air Liquide entered Mexico and decided to invest more than EUR70 million (100 million USD) to build and operate a world-scale ASU in Monclova, Coahuila.
The Large Industries business line of Air Liquide
provides gas and energy solutions that improve process efficiency and help achieve greater respect for the environment, mainly to the refining and natural gas, chemicals, metals and energy markets. 2012 revenues were EUR 5 015 million.
Air Liquide in the Americas
Air Liquide is present in North, Central and South America as well as in the Caribbean, serving customers in a variety of industries from chemicals, refining and electronics to manufacturing and healthcare.
Air Liquide is the world leader in gases for industry, health and the environment, and is present in 80 countries with close to 50,000 employees. Oxygen, nitrogen, hydrogen and rare gases have been at the core of Air Liquide's activities since its creation in 1902. Using these molecules, Air Liquide continuously reinvents its business, anticipating the needs of current and future markets. The Group innovates for the good of society while delivering profitable growth and consistent performance.
Innovative technologies that curb polluting emissions, lower industry's energy use, recover and reuse natural resources or develop the energies of tomorrow, such as hydrogen, biofuels or photovoltaic energy... Oxygen for hospitals, home healthcare, fighting nosocomial infections... Air Liquide combines many products and technologies to develop valuable applications and services not only for its customers but also for society.
A partner for the long term, Air Liquide relies on employee commitment, customer trust and shareholder support to pursue its vision of sustainable, competitive growth. The diversity of Air Liquide's teams, businesses, markets and geographic presence provides a solid and sustainable base for its development and strengthens its ability to push back its own limits, conquer new territories and build its future.
Air Liquide explores the best that air can offer to preserve life, staying true to its Corporate Social Responsibility and sustainable development approach. In 2012, the Group's revenues amounted to EUR 15.3 billion of which 82% were generated outside France. Air Liquide is listed on the Paris Euronext stock exchange (compartment A) and is a member of the CAC 40 and Dow Jones Euro Stoxx 50 indexes.