His Holiness the Dalai Lama Arrives in Mexico 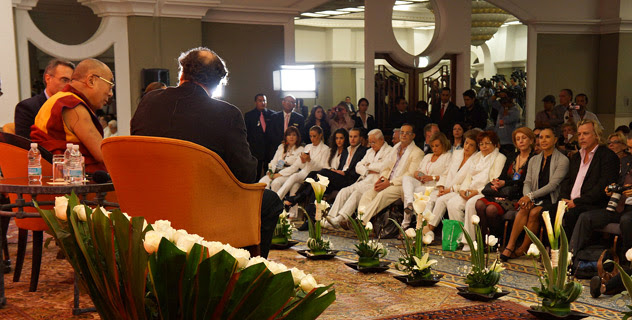 Mexico City, Mexico, 11 October 2013 – Following a brief farewell meeting with key organizers of his visit to Atlanta, His Holiness the Dalai Lama drove to the airport to board a flight to Mexico City. He was met on arrival by Marco Antonio Karam, founder and president of Casa Tibet Mexico. A throng of smiling and happy well-wishers awaited him at his hotel.
Shortly after arrival he met with the press. Introductions over he gave a short address before taking questions.
“First of all, I want to thank all those people involved with inviting me here and arranging this visit. Wherever I go I make two points. The first is that every human being wants to live in peace without being disturbed and everyone has a right to a peaceful life. These days, people rely too much on material things, while the real source of happiness is within. From the moment we’re born we have a need for affection, and the care and affection our parents, our mothers in particular, show us has a lasting impact on our lives. This is why I have an interest in promoting human values. “
He continued to explain that the second point he talks about wherever he goes is fostering inter-religious harmony. All the major religious traditions talk about the practice of love and compassion, which is why there ought to be respect and understanding between them.
His Holiness also had words of encouragement for the media, telling them it is their responsibility too to make the public aware of such issues. Sometimes the media have a tendency to sensationalise stories, that’s ok, he said, but they should also be sure to report things that give people hope. He also advised the members of the media to have long noses like elephants to sniff out what’s going on, both in the open and behind the scenes. And whatever they discover they should report.

The first question was why His Holiness had come to Mexico.
“I was invited and it’s foolish to turn down a friendly invitation. In 1959 I escaped to India from Tibet and in the early 60s I visited Singapore and Japan, but it wasn’t until 1973 that I was able to travel to the West. And when I did I remember a journalist, Mark Tully of the BBC, asking me why I was going. I told him I consider myself a citizen of the world and I wanted to meet people. It’s the same today.”
He said that all over the world people are showing interest in Buddhist culture and philosophy, not least because Buddhism is basically about research and investigation, trying to find out about reality. It seems to parallel science inasmuch as science has detailed knowledge of the external world, while Buddhism has a thorough understanding of the mind. He made clear that, apart from his visits to Washington and Brussels, his travels abroad are not political, although he likes to ask how wide is the gap between rich and poor, wherever he goes, and how deep is corruption.

As the meeting came to a close, His Holiness was escorted to the other side of the stage where a curtain was drawn back to reveal a wax model of the Dalai Lama. He laughed and posed beside it for photographers saying: “There’s one in London, another in Australia and now this one here.”
He bid the press goodbye, telling them that he was looking forward to the opportunity in the coming days to explain Shantideva’s famous book ‘Guide to the Bodhisattva’s Way of Life.’