The Sunday Chronicle: Mexico; In Memory

The man who began the wanderlust in me, my father; in the photo above, walking across the International Bridge in Laredo, Texas/Mexico. 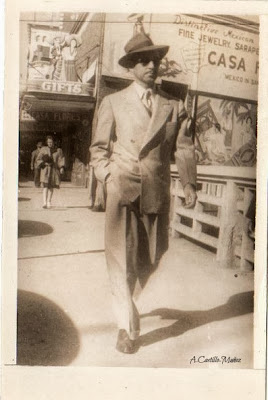 My thoughts can’t help but wander back to the man who put the travel bug in my soul, his birthday would have been coming up this 18th of October. He was a journalist and was lucky enough to get some travel in through different assignments, but his later years were writing a daily column for the local newspaper in San Antonio, Texas.
I look back, and can relate now to that itch to get up and go, but being held back by family responsibilities.  To ease the itch, my Dad made sure that he did what he could, and that at least, summer vacations took us to Mexico; a getaway and family reunions all in one.  As I grew older, he made sure that I spent most of my summers in Mexico. The tios y tias (uncles and aunts) in Mexico picked up where he left off.
The tios, Arturo and Joe; my Dad’s brothers that lived in Mexico City. They lived on their own terms and I loved it. Time? Didn’t mean anything much in those days to them as I recall. There was many a trip I remember when Tio Arturo was supposed to get us to the train station for our departure back home, and pulling in to the train station as the train was pulling out! No problem, we shoved our suitcases back in the car, jumped in and made a death-defying race (think Nascar) to the next town where the train was scheduled to stop; the town was Lecheria, and jokes about Lecheria would last a long, long time.
There are a lot of old photos I’ve recently found, and there are stories within each photo that were before my time.  I can only make up the stories in my mind, and that, somehow or another, brings me great joy.
That’s my Dad on the left in the photo below; I’m not sure who the other man is, but I have this feeling it may be my grandfather. I’ll have to put out an APB to my cousins for help.
There’s a Mexican slang term I’ve just learned, pata de perro, paw of the dog, meaning someone who likes to wander or travel.  If the paw fits…