One of my friends who is involved in the medical administration field here on the U.S.-Mexico border recently mentioned to me that he could tell that the violence in Juarez was subsiding because of what it has done to his medical facility’s business. 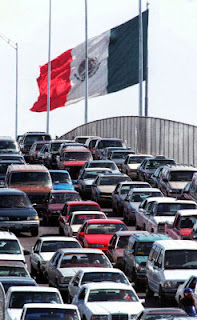 He explained that his facility’s business had gone down during the past year, not because of the decreased number of patients injured in drug violence across the border, but due to the loss of general patients, U.S. and Mexican. Now that Mexican border cities such as Juarez are becoming safer compared to recent years, people are flocking back to Mexico for medical care.
Oftentimes, going to a place such as Juarez or Palomas, Mexico, is convenient and cheap for Mexican immigrants in the U.S. who feel comfortable receiving medical care in a culture and language with which they are familiar. On the negative side is the tendency for some people to go to health-care providers in Mexico or directly to Mexican pharmacies to get a prescription for a drug such as penicillin the moment they feel a sickness coming on.My friend’s situation highlights a reality here at the U.S.-Mexico border – the tendency for many people, both American and Mexican citizens, to seek their medical care in Mexico, even when they are surrounded by doctors and clinics in the U.S. Some do this because of the cheaper cost of clinical visits in Mexico and others because they have a long-standing relationship with their medical providers in Mexico, which they have maintained even though they have lived in the U.S. for many years.
My wife, who has spent years in the medical profession, constantly rails against the overuse of antibiotics in the border region. She and other health-care providers preach about the loss of effectiveness of drugs such as penicillin, due to the creation of super-bacteria that are becoming more resistant to traditional antibiotic treatments. This happens when people self-medicate with penicillin for viruses, which they should not do because this type of drug works on bacterial infections, not viruses. Reports have been surfacing of people with ailments such as ear or staph infections that are resistant to antibiotics because of the overuse of antibiotics they have acquired in Mexico every time they feel under the weather.
Many of my friends and colleagues (both Mexican and American) living in the U.S. who feel the sniffles coming on immediately jump in their vehicle and head into Mexico for a doctor visit or to a pharmacy to purchase a type of medication they think will cure them. I have had many spirited discussions with these people as to why they wouldn’t just go to a local clinic in the U.S., even if they are charged for the visit. Some tell me that they don’t have health insurance and that it is cheaper to go to Mexico. Because Mexico has a national health-care system, called the Insituto Mexicano de Seguro Social (IMSS), which provides services for Mexican citizens, these people can receive virtually free health-care by visiting Mexico.
However, many people shy away from going to any of the public clinics in Mexico and opt to go to private clinics. In this case, I argue that even if the clinic charges are less in Mexico, the time and fuel that will be required to make the visit still have their own costs. Wouldn’t it make sense to seek medical care in the U.S. when these types of costs are considered? Apparently, the answer is “no” because they continue this long-standing tradition.
The preference of many people living in the U.S. border region to seek medical care in Mexico brings up another interesting situation as the issue of Obamacare heats up and U.S. businesses scramble to understand its effects and implications. How will this affect U.S. citizens who also prefer to seek their medical care in Mexico? Furthermore, there is great uncertainty in general how the new national health-care program will affect Mexican citizens living in the U.S., both legally and illegally. I always have said that things that work well in other parts of the U.S. do not necessarily apply well in the border region.
In all probability, the inclination of the thousands of people who cross the border into Mexico for medical care will probably continue, whether or not they are covered under some type of U.S. health-care plan. It will be interesting to see how U.S. policymakers will account for these people in the health-care statistics that will undoubtedly be generated as the national health-care system is implemented.