Provided by the campaign of David Alvarez 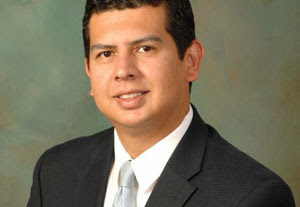 The son of Mexican immigrants, David Alvarez, a first-term San Diego Councilman, is shaking things up in the race to replace former Mayor Bob Filner, who resigned Aug. 30 amid a sexual harassment scandal.

If he wins the Nov. 19 special election, Alvarez would become the first Latino mayor in San Diego, a city near the Tijuana, Mexico border that has a Latino population of about 29 percent.

Asked about the possibility of making history, the 33-year-old said he was excited about it.

"I am thrilled to serve as a role model, because like (all Latinos) I am trying to make it," he said.

But, Alvarez noted, he was not running to make history- but to represent and serve all San Diegans.

"We can make San Diego great again and we can have a city that works for all of us," he said.

Alvarez was born in San Diego and raised in the Barrio Logan area of the city, a working-class community and home of Chicano Park, a Chicano-themed public park.

Like all immigrants, his parents, who have a third-grade education, came to the U.S. looking for opportunities to be successful.  His father worked labor intensive jobs and his mother stayed home to raise the children. When Alvarez and his siblings were older, his mother went to work at various jobs at fast food restaurants.

The young politician attended San Diego public schools and was the first in his family to attend college; he graduated from San Diego State University with a degree in psychology. He became a social worker and also worked as an after-school teacher at a youth center.

But it was through a fellowship in Sacramento, under former Secretary of State Kevin Shelley, that he got his first taste in politics - a job that eventually led him to San Diego City Hall.

Seven years later, Alvarez led a grassroots campaign for City Council against "better" funded candidates and won. He now serves as the San Diego District 8 Councilmember, an area predominately made up of Latino communities.

"Being involved in politics was foreign to me. This is not in my family, but I had always wanted to give back to the community," he said.

Alvarez and his wife, Xochitl, have a 3-year-old daughter and they are expecting their second child in early 2014.

While his opponents may have more political experience, Alvarez said his involvement in politics, thus far, has prepared him for the mayoral job.

"I feel very prepared to take on the job. I am a man of faith and have spent time praying over my decision," he said. "It is the right time."

Lori Saldaña, a former member of the California State Assembly, said Alvarez was "the best choice" for San Diego mayor because he has demonstrated great commitment to his communities.

"He makes a difference and improves things, he keeps us grounded," Saldaña said. "He has definitely worked hard for his communities in City Council and he would be a great change."

San Diego Labor Council Secretary-Treasurer Richard Barrera said his group endorsed Alvarez because, as a member of the City Council, Alvarez has focused on budget and finance issues and has helped the city reduce spiraling retiree health care costs.

"Our members took a hard look at all of the candidates and decided that David is the best choice to move San Diego forward - past distraction and scandal at City Hall - and to get our city refocused on creating good jobs and delivering the vital services residents need," Barrera said.

Another Latino is also vying to become the city's major. Former City Attorney Mike Aguirre, who is also a Democrat, is polling at about 9 percent, vs. Alvarez's 17 percent.

Leading in the polls is Democrat Nathan Fletcher, a former California State assemblymen, who has polled at about 27 percent and City Councilman Kevin Faulconer, who has polled at 26 percent. The two frontrunners, though, have heavily courted the Latino vote - with Fletcher receiving key support from prominent Latinos, and Faulconer giving part of his official campaign announcement in Spanish.

Alvarez is a proponent of immigration reform and has advocated for a secure and more efficient San Diego border crossing.

"I have backed immigration reform for quite some time. I believe we need a pathway to citizenship, especially for DREAMers and for those that serve in the military," he said.

He also said his one of his priorities will be education.

"As a first generation Latino in the U.S., I know I wouldn't be where I am today without many programs in the system," he said. "They are critical."