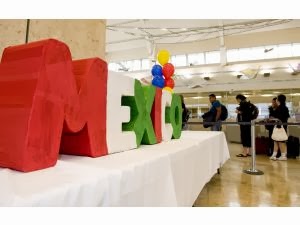 In August, John Wayne's peak travel month, more than 264,000 passengers flew to and from Mexico, more than double the 115,600 in August 2012. The increase was helped in part by AirTran, which added a second daily flight to Cabo San Lucas in the summer.
A year ago in January, only about 5,600 passengers flew what was then the airport's one international flight a day on WestJet to Vancouver, British Columbia. International traffic jumped to just more than 30,000 passengers in January after AirTran and Interjet launched daily flights last year to Mexico City, Cabo San Lucas and Guadalajara. WestJet still has its one daily flight to Canada.Through August, nearly 6.2 million passengers went through John Wayne's gates. It was the first time since 2008, when the Wall Street meltdown hit travel, that John Wayne's traffic for the first eight months of a year topped 6 million. Overall travel at the airport in August was up 5 percent, year over year.
Jenny Wedge, spokeswoman for John Wayne, attributed the strong showing not only to growth in Mexico service but also increased demand for domestic travel.
Operations by private planes and jets at John Wayne continued a long-term decline in August, as it becomes more costly to fly one's own plane or charter a flight. General aviation at the airport fell 8.1 percent for the month and is down 5.1 percent for the year.
John Wayne has only two cargo flights a day. Some packages also are shipped in the belly of commercial flights. Cargo tonnage for July rose 7.3 percent and is up 2.6 percent for the year. (Cargo data lags passenger numbers by a month.)
Long Beach Airport is still seeing passenger declines. About 293,000 passengers flew out of Long Beach in August, down 7.3 percent from the same month last year. Year to date, travel is down 8.7 percent. Airport officials say JetBlue, which has three out of four flights at the airport, has cut back on some service this year as the airline deploys aircraft to other markets.
General aviation at Long Beach jumped 27.1 percent in August, but is down 0.7 percent for the year. Air cargo was off 0.5 percent in August and was unchanged for the year.