Construction On Airport Terminal Linking Tijuana To San Diego Is Off The Ground
Tuesday, October 8, 2013 By Adrian Florido 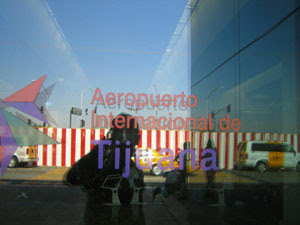 Construction is beginning on the cross-border terminal that will give travelers easier access to the Tijuana airport from the San Diego side.

It's been in the works for more than 20 years, but last month, construction finally began on the so-called cross-border terminal that will let travelers cross from the Tijuana airport directly into San Diego.

The project will include a bridge of more than 500 feet spanning from the airport and across the border fence to a new customs station soon to be built on the San Diego side in a empty field in Otay Mesa.

"It has been a very long time coming, but it has been very, very welcome," said Cindy Gompper-Graves, director of the South County Economic Development Council.

The cross-border terminal is slated to be operational by the end of next year. It will allow only ticketed airline passengers who pay a fee to cross the bridge in either direction. Because of the restricted use by passengers and the toll to use the bridge, developers expect to virtually eliminate the long border waits to get back into San Diego, which many travelers from the U.S. endure when using the Tijuana airport.

Gompper-Graves and other supporters of the project think it will be a boon to cross-border tourism, and just as importantly, to investment by foreign manufacturing companies that want to open factories in Tijuana and distribution warehouses in Otay Mesa.

"I think we all agree that those border wait times are a huge deterrent to companies looking to locate on both sides of the border," Gompper-Graves said. "This will make it easier for them to do that. This will make it more accessible for them to access other markets."

Though construction has already begun on the Tijuana side, the bridge does have its detractors, among them, airport taxi drivers.

They said more than half of their clients ask to be driven to one of the two existing border crossings, a trip that can cost up to $15. They expect most of that business to be wiped out once the bridge opens, allowing people to cross into San Diego on foot, directly from the airport.

One airport taxi operator, who asked not be identified for fear of reprisals from airport management if he spoke publicly against the much-anticipated bridge, said that in addition, he saw few benefits to his city from the project.

"It's going to be good for people of San Diego, but not really for Tijuana. A lot of people who used to come into the city to get to the airport won't even have to do that anymore," he said.

Guillermo Villalba, the Tijuana airport's director, disagreed. He said the cross-border terminal was going to put Tijuana on the world map, and send a message that the border region was prosperous and safe.

The cross-border airport bridge has been in the works since the early 90s, when business boosters on both sides of the border first started exploring the feasibility of a cross-border airport facility of some kind. At one point, the hope had been to have a terminal building right on the border that would allow airplanes to pull up on both the Tijuana and San Diego sides. That idea was scrapped due to security concerns.

The most recent project has been in the works since 2009. It's funded by private U.S. and Mexican investors. They've been gathering the mounds of permits needed to build a bridge spanning two countries. They've also been working out other logistics, like how to pay for the customs agents who will be stationed on the U.S. side.
at 7:18 PM