ROSARITO BEACH, BAJA CALIFORNIA, MEXICO---Two of the world's best mariachi bands will perform at the Oct. 5 extravaganza concert that highlights this year's five-day mariachi and folklorico festival at the Rosarito Beach Hotel & Resort. 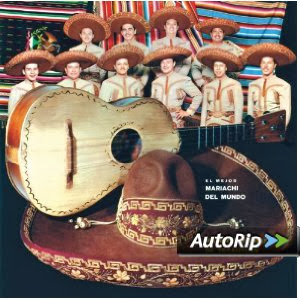 Mariachi Vargas de Tecalitlan, long known as the world's best, will perform in Rosarito for the first time in its 116-year history, along with the all-female Grammy-winning Mariachi Divas. Twelve other international acts will be featured in the concert for which seating begins at 6 pm.

All net proceeds from the festival will benefit the Boys & Girls Club of Rosarito. Concert ticket prices begin at $20, $10 for other events and complete packages at $100. The hotel also offers special rates for the event.

The oceanfront festival, organized by mariachi expert and author Gil Sperry, also features films, student workshops, plus groups from Mexico and the United States competing for shares of $10,000 in prize money. Tickets can be bought online at www.clubnyn.org

At 5 p.m. on Oct. 3, Mexican stars Ruben Fuentes and Pepe Martinez, Sr. will be inducted into the Hall of Fame. This will be followed by "A Cocktail With The Stars," with photo opportunities, drinks and appetizers.

The three-day intensive workshops are held from 9 to 4 and are open to aspiring performers ages 10 and over. Cost, schedules and details for these and other festival events also can be found on the club website.

Ms. Torres can be reached at rosymtorres@hotmail.com or, Mexican phone, 661-850-1773. Complete event information also is listed on the club site, as well as at www.rosaritobeachhotel.com

Reservations can be made at www.rosaritobeachhotel.com

The festival, featuring the Mariachi Divas since its inception and set against an ocean backdrop with food and wine, is one of the most popular in the tourist resort city. It has grown each edition and this year's, with Mariachi Vargas making its first Rosarito, appearance will be exceptional.

"We're honored to have this legendary group, along with the Mariachi Divas and others, perform here," said Hugo Torres, owner of the Rosarito Beach Hotel & Resort. "We know that hundreds of our friends from the United States as well as Mexico will join us."

"We invite everyone to experience this great musical and cultural event," Mr. Torres said. "We recommend that people reserve tickets early since past concerts have attracted very large attendance."

Mariachi Vargas de Tecalitlan, takes it names from the small village near Jalisco where it was founded in 1897 by Gaspar Vargas.

The 13-member group has recorded more than 50 CDs and has been featured in hundreds of films and music videos. They have recorded with Luis Miguel and Linda Ronstadt, and also toured with Ms. Ronstadt.

Traditional mariachi groups have at least 12 members and more closely resemble a small orchestra than a strolling band of a few musicians. People experiencing true mariachi for the first time often are surprised at how beautiful and complex the music can be.