Mexico City, Aug 16 (EFE).- Trade between Mexico and the United States, which amounted to nearly $500 billion in 2012, is indicative of well-developed commercial integration that should evolve into large-scale "productive integration," Mexican Economy Secretary Ildefonso Guajardo said. 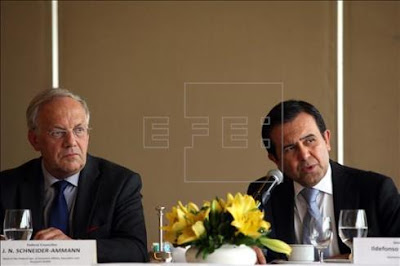 "The next step is to have the clear vision that what has been large-scale commercial integration must be consolidated into what is becoming large-scale productive integration," Guajardo said Thursday at the inauguration of a meeting of the U.S.-Mexico High Level Regulatory Cooperation Council.
Last year, Mexico's overall foreign trade was valued at $741.7 billion, 63 percent of it with the United States. The flow of commerce crossing the U.S.-Mexico border amounted to $1.3 billion per day, or $1 million a minute.
The economy secretary said "each peso or each dollar of exports" that flow from Mexico to its northern neighbor includes 40 cents worth of inputs produced in the United States.
These figures show the level of commercial integration, he said, adding that the two nations are working intensively at the meeting, which kicked off Thursday, to harmonize their respective regulatory norms and practices.
The meeting's goal is to review the progress made in aligning the countries' regulatory criteria, which is necessary to reduce costs and increase competitiveness relative to other areas of the world.