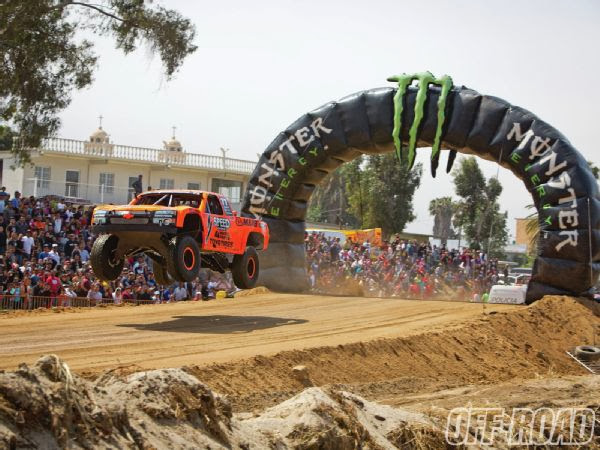 The Baja 500 has run every year since 1969 and has changed and evolved as new technology and new ideas filtered into the sport. Though SCORE was started by the late Mickey Thompson, the lion's share of the Baja 500 has run under the watchful eye of Sal Fish. This year was different. Twenty-thirteen marked the first year that the SCORE Baja 500 happened under the leadership of new CEO Roger Norman.
We had the chance to sit down with Norman a few months ago and talk to him about his new ideas for off-road racing. Norman spoke about expanded entertainment during tech and contingency, new safety measures, and off-road racing's popularity potential with worldwide television coverage. Days later, Norman was on the road heading south to lay out the Baja 500 course and coordinate the logistics.
Even with new ideas in mind, Norman hasn't forgotten SCORE's heritage or the hard work of his predecessor. To honor former SCORE president Sal Fish, Norman offered Fish the grand marshal's chair for this year's 500.
So how did it go? Tech and contingency were a big street party, as always. Added elements, such as a freestyle motocross demonstration, gave attendees that much more reason to be there. Safety measures included qualifying for the Trophy Truck and Class One divisions, ensuring that the fastest teams would be out in front instead of trying to thread their way around slower competitors. Another significant safety measure was to have the Sportsman motorcycle and ATV classes run an abbreviated course, a move that put even the slower bike and ATV racers well ahead of the trucks and buggies.
Is off-road racing a mainstream American sport? Not yet, but there's no doubt of its rising prominence. We were surprised the other day in the supermarket, as a visit to the newsstand found Trophy Truck racer "Ballistic" B.J. Baldwin on the cover of DUB magazine. Strange, but true! It's doubtful that off-road racing will replace traditional American stick-and-ball games, but we think the day will come when the average citizen will understand the difference between a Trophy Truck and a Monster Truck. Just wait.
We'd be remiss not to mention the overall results. Robby Gordon put his Speed Energy Trophy Truck at the top of the four-wheeled field. The mid-engine, V-drive truck debuted in 2003, and its competitiveness today shows just how good it was from the beginning. Gordon's effort was hard-fought, topping Second Place was Baldwin, and Third Place Bryce Menzies by just a few minutes.
Each year, a different theme arises following the race. For 2013, it was the year of the smooth transition.