A new global initiative wants to present a more persuasive argument for action on climate change by focusing on the economic benefits of doing so. 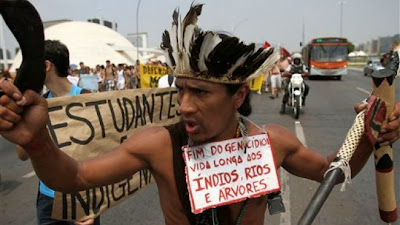 The Global Commission on the Economy and Climate, chaired by former Mexican President Felipe Calderon, is launching a year-long study to analyze the economic costs and benefits of acting against climate change.
The results of the study, which will be undertaken by research institutes on five continents, will be released in September 2014.
"The world faces two great challenges: to fight poverty and to fight global warming," Norway's Prime Minister Jens Stoltenberg said at the launch of the initiative on the sidelines of the U.N. General Assembly. "We cannot choose between them."
Calderon said a strong argument that fighting climate change will lead to economic growth could persuade more governments and companies to take part. "All this time, we have talked about emissions," Calderon said. "But this time, we will try to talk about profits. That could change the equation."
The seven countries that commissioned the $9 million study are Colombia, Ethiopia, Indonesia, South Korea, Norway, Sweden and the UK.
Sweden's minister for the environment, Lena Ek, noted that her country has been able to address both issues.
"Since 1990, we have cut carbon emissions by 20 percent, while our GDP grew by 60 percent," Ek said.Based on reporting by The Associated Press.
http://latino.foxnews.com/latino/money/2013/09/24/mexicos-calderon-leads-study-on-economic-benefits-climate-change/