RIVERSIDE COMMUNITY ARTS ASSOCIATION
September 19, 2013; 10:19 AM
Riverside Community Arts Association is in the process of building ties with the rural libraries of Riverside’s sister city, Ensenada. In late August RCAA director Mark Schooley organized a children’s art workshop at one of the ten rural libraries outside of Ensenada. 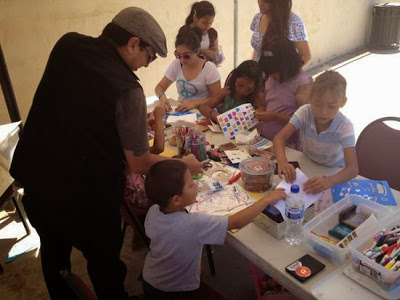 “These libraries serve an underrepresented population that live in the region. RCAA is working in partnership with the International Relations Council of Riverside (IRC) and other nonprofit groups in the United States and Mexico on a range of programs related to the libraries in an endeavor to rehab and expand the library sites, along with developing arts programs to be centered at the libraries,” said Schooley. “The RCAA is committed to working with our own Riverside libraries, along with our sister city libraries. We will be working on ways to strengthen the ties between our libraries from both cities.
In March of this year the RCAA collected over 230 art books from its artists members and the general public, which were distributed to the rural libraries in Ensenada.
Working with the RCAA, IRC, City of Riverside, Riverside Downtown Partnership, Riverside Arts Council and other community groups, Schooley has coordinated ten cultural exchanges with Ensenada over the last six years. They have organized an exhibit of University of California Riverside graduate art students, along with a selection of Riverside artists that will be on view at the CEARTE State of Baja Art Center in Ensenada in October.
“These international projects are important to promote good relations with the citizens of all countries. Building strong positive relations with Mexico is very important at this time,” stated Schooley.