Lanterns to light up Baja coastline


ROSARITO BEACH — For the second year in a row, Americans who love Baja California are spearheading an effort on Saturday to launch hundreds of paper lanterns from a stretch of the state’s Pacific coastline. 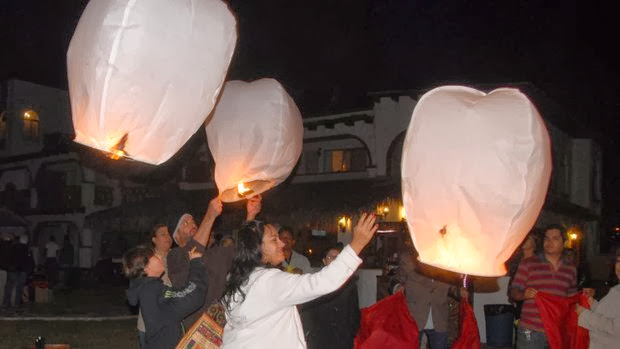 Organizers of “Shine on Baja” are calling it a mob art event aimed at creating a sense of community along a stretch of coast that caters to tourists. The lantern launching is scheduled for 7 p.m., just after sundown, from some two dozen launch sites from Playas de Tijuana to Ensenada.
Organizer Debbie Shine said more than 2,000 biodegradable lanterns were used last year. On Saturday, she’s hoping to see as many as 5,000.
While she hopes the event will bring draw customers to area businesses, she said the the main purpose, is “just art for art’s sake, a fun thing to do."
Shine is an interior designer who has lived in Baja California for 20 years. Her co-organizers are Virginia Shuey, a San Diegan who owns a weekend home in Rosarito Beach, and Paul Corona, owner of two Rosarito Beach hotels.
Both Mexicans and Americans participated in last year’s event. “Little Mexican kids with their families were in awe,” Shine said. “The mere launching of these lanterns has a bit of a peaceful, spiritual feel.”
Lanterns are provided for free or sold for about $4 apiece at the launch locations. For further information and locations, go to the facebook page Shine on Baja.
http://www.utsandiego.com/news/2013/sep/25/lanterns-baja-tourism-rosarito-ensenada-tijuana/