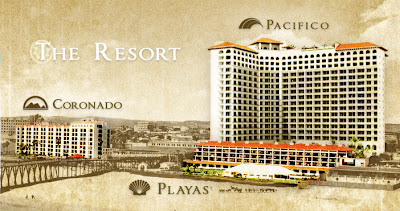 More than 200 people paid $35 each to attend the food-and-beverage pairing competition between 10 of the finest chefs in Baja, filling the salon and rooftop terrace area of the 17-story Pacifico Tower of the oceanfront resort.

The event was so successful and the feedback so positive that the next Sabor de Baja already has been planned for the resort on Aug. 27 of next year, said organizer and coordinator Bo Bendana. Sabor de Baja also benefits the Rosarito Boys & Girls Club.

The event will likely be moved to a larger venue at the hotel, perhaps the garden area, to accommodate as many as 750 people, said Rosarito Beach Hotel & Resort owner Hugo Torres. This year's event quickly sold out because of exceedingly high response.

"Baja's cuisine, wine and craft beer is having a wonderful resurgence, thanks in part to attention from celebrity chefs including Anthony Bourdain," Mr. Torres said. "We know this will continue with the many great chefs, wineries and breweries in the region."

"With her great reputation among Baja 'foodies,' Ms. Bendana was able to attract most of the guests plus the best chefs in Baja,' Mr. Torres added. "She did a wonderful job in organizing this exceptional event."

A panel of judges, including chef Martin San Roman, food columnist Bill Esparza, plus food and beverage consultant Chuy Tovar, helped decide the winner of the Sabor de Baja for 2013, who was Juan Jose Plascencia, of Caesar's in Tijuana

World-famous Caesar's is the historic restaurant where the Caesar salad was invented, one of Baja's many culinary contributions to the world, which also include Puerto Nuevo-style lobster.

"It is heartening to see Baja's contributions to gastronomy, including the emerging Baja-Med cuisine and our wine scene, achieving such international recognition," said Mr. Torres, who also is chairman of the Baja Image Committee.