Hawaii's Hispanic community is small, but growing, according to the Migration Policy Institute and UH Manoa. 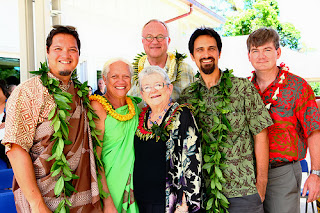 Their research finds Hawaii now has about 38,700 Mexican-origin residents, up 165 percent from 14,600 in 1990.
Mercado de la Raza owner Martha Sanchez Romero told us, "The increase I notice is usually in August or the summer because a lot of military. It's when they move."
Sanchez Romero has run the Latin American market on Beretania for 19 years. The price of paradise is a big barrier for Hispanic families says the businesswoman. "The Hispanic families tend to have more children. They know housing is very expensive. Food is very expensive. I think that's the biggest drawback. Also, wages are very low."
The report finds key differences between Hawaii's largest newcomer Latino group and the 12 million Mexican immigrants on the Mainland.
Michelle Mittelstadt of the Migration Policy Institute explains, "Those in Hawaii are overwhelmingly US citizens, they have higher levels of education, greater English proficiency, and lower rates of poverty."
The report finds this growing segment tends to be employed in the military, construction, agriculture or tourism industries.
Sanchez Romero's son Reynaldo Minn says he's seen customers come and go. "A lot of our customers who've come have kind of been disappearing over the years because they've either moved back to Mexico or moved to the Mainland to find work because there's been a shortage of jobs here."
Frank Gonzales, Manager for Kapiolani Community College's Culinary Arts Continuing Education Program, is a regular customer. He hasn't personally witnessed the population boom but said, "I would personally love to see more Mexicans or Hispanics. Hopefully, that would be more Mexican restaurants, little bit more awareness of Mexican culture."
The report suggests the State cater to the growing population by opening a permanent consulate. Juan Manuel Calderon Jaimes, visiting Foreign Service Minister from Mexico City said, "We are thinking of opening an office in Hawaii, but first we have to get permission."
A permanent consulate requires the approval of federal and state authorities.
Among the report's findings:

The report makes a number of recommendations, including that the state address the integration prospects of this steadily growing community by expanding language access for Spanish speakers so they can interface meaningfully with schools, state and local government and courts, and law enforcement; plan for age-appropriate services for young children and elderly residents of Mexican origin, particularly those with limited English proficiency; and work with U.S. Immigration and Customs Enforcement to ensure its enforcement is directed at its priority targets.