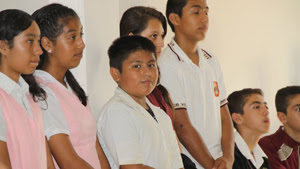 TIJUANA - A group of U.S.-born middle school students struggling to acclimate to their new surroundings in eastern Tijuana can now count on some extra help.

A pilot program targeting 32 students in a low-income neighborhood on the city's outskirts was launched Monday, with funds from the National City-based International Community Foundation.

The program, which is slated to last through early January, is aimed at young U.S. citizens who ended up in Tijuana when their parents were deported or because the parents decided on their own to return to Mexico, often for economic reasons.

"I think this is going to be the best thing ever," said Ruth Solorio, mother of 11-year-old Davin, who was born in Escondido.

Mother and son have been living in Tijuana since she was deported two years ago. Davin, who spoke no Spanish when he arrived, has had a hard time keeping up with his classmates. "The hardest thing is that I can't read in Spanish," said Davin, who hopes to return to the United States one day.

The program is underwritten by a $21,000 grant from the foundation and coordinated by Tijuana's Fundación Para la Protección de la Niñez. It targets students from Secondary School Number Ten, a public middle school in a neighborhood known as Ex-Ejido Francisco Villa.

Sessions are scheduled for three days a week outside of school hours at a nearby community center known as Vecinos de la Frontera. The aim is to reinforce participating students' knowledge of English while teaching them Spanish, strengthening their computer skills and offering counseling support to help them adjust to their new school environment.

"The fundamental idea is that the child can have a life plan in either country," said Yara Amparo López, coordinator for the Baja California Public Education Secretariat's Binational Migrant Education Program, which designed the curriculum and selected the teachers.

The secretariat calculates that about 5,000 students in preschool through middle school are foreign-born - more than nine out of 10 of those in the United States, said Emmanuel Mendoza Gómez, the agency's director of support programs.

International Community Foundation president Richard Kiy said he came up with the idea for the program after reading a November 2011 story in U-T San Diego about such students' plight. If the program is successful, he hopes to extend and expand it.

"We wanted to try to make a difference," Kiy said. With many of these students planning to eventually return to the United States, he said, "we felt there was a real need to provide educational enrichment so they could integrate better to the United States when they complete their studies in Tijuana."