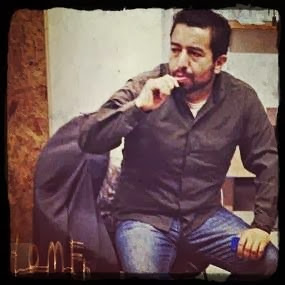 TIJUANA - Rafael Saavedra, a chronicler of Tijuana's nightlife and key cultural figure in the city, died Tuesday at age 46.
Saavedra has been credited with the phrase "Tijuana makes me happy," that later became the title of the song by Nortec Collective Bostich + Fussible.

Though he wrote in Spanish, Saavedra often would inject English-language expressions into his pieces, like a true border resident. Saavedra "will be remembered as one of the most innovative writers of contemporary border literature," according to a statement from Tijuana's Cultural Center.

Saavedra underwent surgery Tuesday at federal ISSSTE Hospital, following a heart attack Sept. 7, said his friend, photographer Julio Blanco. Though ailing and in intensive care, Saavedra had been upbeat in recent days, Blanco said, and happy to have friends visit and write.

A native of the city, Saavedra "was a person who lived the life of Tijuana," said Blanco, who accompanied Saavedra on many of his nocturnal journeys.

"Going out at night is to dare to live, when others have surrendered," Saavedra wrote in a 2009 essay, "Confessions of a Night Addict,"published in the cultural magazine PicNic.

Known as Rafa to his friends, Saavedra was scheduled to participate in the upcoming Festival Tijuana Interzona, a celebration of the city's cultural life. He was the author of numerous pieces about Tijuana and the border.

His book, "Border Pop," won Baja California's prize for literature in 2012. Among his numerous other writings was a chapter in the 2012 book, "Tijuana Dreaming: Life and Art at the Global Border," a collection of essays edited by Josh Kun and Fiamma Montezemolo.

Jaime Cháidez, a cultural critic, wrote that "what's most important is that Rafa did not just limit to expressing himself as a writer." Saavedra was an early user of the internet to broadcast his message, Cháidez wrote, worked as a DJ to spread word of the city's electronic music movement, and conducted radio interview of local cultural figures.