Toro’s Tacos comes to the Corner


Restaurants on The Corner come and go like dust in the wind. The Backyard, Rita’s Ice Cream, Big Dawgz and, most recently, Baja Bean have fallen to the wayside just in the past several years. If you want to open a restaurant on the Corner, you better be ready to bring the heat. 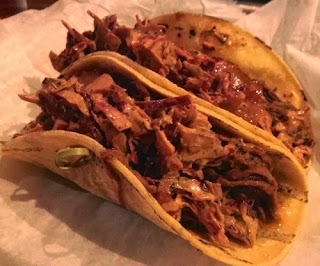 Into this competitive atmosphere steps Toro’s Tacos, which has replaced Baja Bean and boasts house-made margaritas, tacos, quesadillas and a host of appetizers. Though some dishes leave more to be desired, others — such as the braised brisket taco — truly shine.
At first glance, Baja Bean’s dated interior has met a much-needed update. The bar has been decorated with a massive Texas longhorn on the mantle, neon green lighting and a new countertop. The stairs rock an effortlessly cool Spanish-style tiling that adds a lot to the Texas-dive-bar-meets-Mexican-taqueria vibe.
Dinner started with salsa, chips and queso. The salsa was a fresh pico de gallo with chopped tomato, white onion, chilies, lime and cilantro. Every bite was chunky and refreshing, making the $1.50 price tag easily justifiable. The queso was a bit underwhelming, as it was heavy, warm rather than hot, and lacked an overall depth of flavor outside of the Monterey Jack.
Entrees included the pork quesadilla and the braised brisket tacos. The pork quesadilla came in at a whopping $14. Though expensive for a quesadilla, the combination of Monterey Jack, Cheddar, Queso Fresco and pork was enough to entice me to take the leap. Also, the quesadilla came with a side of rice, black beans and grilled street corn that did not come with the tacos.
The quesadilla was loaded with juicy pork and had great southwestern flavor. The street corn, a grilled corn on the cob with Mexican seasonings, was grilled well with a nice level of sweetness. Unfortunately, the black beans left something to be desired, and the rice lacked seasoning. A little lime, salt and fresh cilantro would have gone a long way.
The braised brisket tacos were the highlight of the evening. Coming in orders of two and three, for $9 and $13 respectively, the braised brisket was absolutely succulent. Topped on a fresh corn tortilla with candied bacon and a chipotle slaw, the brisket melted in your mouth, with the chipotle slaw adding a nice level of heat.
A largely disappointing aspect of the Toro’s Tacos, however, was the structure of the taco menu. You cannot order just one of their eight specialty tacos. Orders come in sets of two or three, and tacos cannot be mixed and matched. If you want a chicken taco and a brisket taco, you are out of luck unless you have a dining companion willing to share. Tacos priced individually would make the whole experience significantly nicer.
Though Toro’s Tacos has some work to do, it has the potential to establish itself as the Corner destination for Mexican-inspired cuisine. The food is of higher quality than Two Guys Tacos and El Jaripeo. Additionally, Toro’s has the best margarita in walking distance of the University, as well as the best atmosphere of all local Mexican restaurants.
With a few tweaks Toro’s could become a great Corner taqueria. But even as a shadow of what it could be, Toro’s proves in its infancy to be a great improvement from Baja Bean.