Teams pose at Tijuana's historic Jai Alai building as they prepare to film five documentaries set in Tijuana that are being screened on Thursday at the Tijuana Cultural Center. - Colef 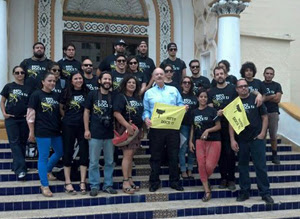 TIJUANA - Five short documentaries that were shot in Tijuana within the same 100-hour period will premiere on Thursday at 8 p.m. at the city's Cultural Center, or CECUT.

Dubbed Reto Docs TJ, the competition is part of the BorDOCS 2013forum that opened last Friday and runs through Saturday. The event brings together academics, filmmakers, students of the genre and the general public for screenings, master classes, and workshops.

Forum supporters include Cecut, Colegio de la Frontera Norte, Autonomous University of Baja California, and the U.S. Consulate in Tijuana. The aim of the festival, now in its tenth year, is to promote non-fiction films.

The Reto Docs TJ, held for the first time, is inspired by a similar competition in Mexico City. The challenge began at noon on Aug. 29th, when the five participating teams were given 100 hours to film and produce 10-minute documentaries that tell stories set in the city.

The results are being shown at 8 p.m. at the Cineteca movie theatre inside the CECUT. It is open to the public and there is no entrance charge.

The documentaries include:
"UkBalaam"by Jesús A. Guerra Huerta, the story of a deportee of Mayan origin who lives in the Tijuana River channel.
"Del Zacaz no me sacas" by Yadira Esther Gutiérrez, focusing on Pancho, the bartender and owner of the Zacazonapan Bar in downtown Tijuana.
"Música que Salva" by Alejandro Montalvo, who follows three children from low-income areas of Tijuana who study music under the Baja California Orchestra's REDES
"Ruta 40" by Paulina Castro Murillo, which tells the story of Don Ciri, an ice cream vendor who holds on to his traditions.


"Debajo del Cuero" by Gabriel Arvizu Rodríguez, about the lives of bikers in Tijuana.