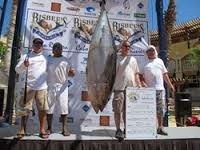 Team North Star of Pueblo La Playa, Los Cabos racked up yet another big win this past weekend, this time at the two-day 2013 Bisbees Offshore fishing tournament in Cabo San Lucas. A 201 lb yellow fin tuna, the tournament's largest qualifying catch, sent them home with a $110,075.00 payout.

Gonzalo Castilla manned the rod, with a Shimano Tiagra 50 spooled with 100 pound braided line. Castilla brought the monster tuna boat-side in a little over an hour. The fish wasn't ready to give up the fight, however. It broke off the first gaff, and plunged back into the sea. Castilla and crew fought another 20 minutes to work the yellow fin up to the surface again. This time the crew were ready with two gaffs, and got the giant tuna into the boat in short order.

Deep Sea Fishing off of Cabo San Lucas and San Jose del Cabo has been Team North Stars specialty over the past three years. Big Tuna, Dorado and Marlin have all been the target of North Stars efforts in Cabo, though yellowfin tuna is the fish that has won the team the most money this past year.