(Reuters) - Tropical Storm Sonia picked up speed as it took aim at the Pacific coast of Mexico on Sunday, threatening intense rains over a large portion of western Mexico that experienced major flooding over the past couple of months. 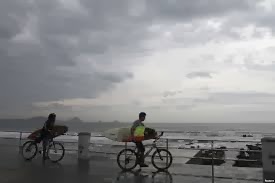 Sonia was churning 115 miles south of the resort city of Los Cabos at the southern tip of the Baja California peninsula and was expected to approach the mainland coast Sunday night or early Monday, the Miami-based U.S. National Hurricane Center said in its latest advisory.
The weather system was traveling north-northeast at 14 miles per hour with maximum sustained winds of 45 mph, the NHC said.
A tropical storm warning is in effect for a stretch of the coast from the resort city of Mazatlan north to the town of Altata, both in Sinaloa state.
Sonia is expected to produce rainfall of 3 to 10 inches in both Sinaloa and Durango states, the NHC said.
Mexico's national water commission said heavy rains could extend to seven other western and northern states.
In September, Mexico suffered its worst flooding since records began when storms Manuel and Ingrid converged from the Pacific and the Gulf of Mexico, killing more than 150 people and causing damage estimated at around $6 billion.
Last month, Hurricane Raymond caused some flooding as it approached the Pacific resort cities of Acapulco and Zihuantanejo, but no deaths or major damage was reported.
Sonia is the 18th named storm system during the current eastern Pacific hurricane season, which began in May and is set to conclude at the end of this month.