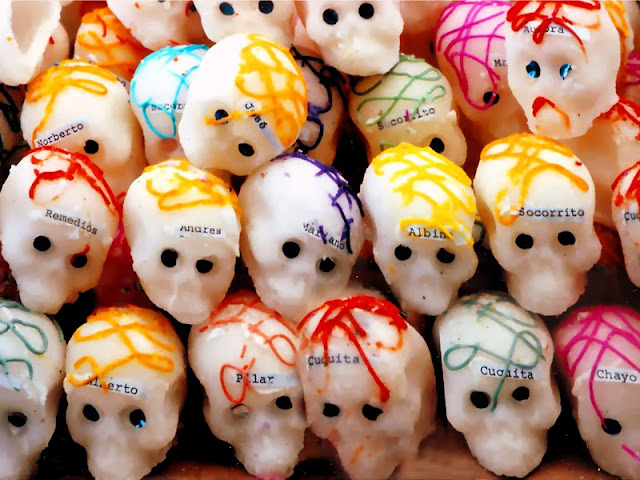 Latinos and others enchanted by Dia de los Muertos, the Mexican Day of the Dead, celebrate by, among other things, decorating skulls made of sugar.

Often they write the dearly departed's name on the head, and place it on an ofrenda, a home-made altar.

An ofrenda has three tiers. One for each of the ancient Aztecs' three deaths: physical, burial and being forgotten, said Angelique Grijalva, an artist.
"With the ofrendas you're ensuring they'll never be forgotten," Grijalva said.

Grijalva first saw sugar skulls as a girl. Her grandmother took her to the Catholic cemetery to celebrate Dia de los Muertos - "celebrate" perhaps sounding strange to the uninitiated.

"It was very beautiful," Grijalva recalled. "There were people singing and playing guitars and picnics. It seemed so happy."

All over the cemetery, people doted on graves, cleaning headstones, placing flowers, candles and sugar skulls, and socializing while honoring ancestors and beloveds.

In so doing, they carry on a tradition tracing back centuries to central Mexico.
The Aztecs believed that the mythological goddess Mictecacihuatl, Queen of Mictlan, the underworld, watched over the bones of the dead.

Spanish conquistadors tried to stamp out this heathen observance. They succeeded only in shortening it and centering it around the Christian All Saints' and All Souls' Day. So the holiday is culturally synthetic.

And seductive. Many people outside the Latino culture adopt at least part of Dia de los Muertos tradition, in part because the skeleton imagery is colorful and humorous, an affirmation of life, as well as death.

"It's not a religious holiday, it's a cultural holiday," Grijalva said.
And its theme is universal. "Everybody has that experience in life of losing someone."

The basic recipe for sugar skulls is simple: a cup of granulated sugar, a teaspoon of meringue powder (a stiffener) and a dash of water. That will make several small skulls.

Press the mixture into a skull mold. After hardening for 24 hours, decorate with paints, feathers, glitter or small jewels or whatever strikes your fancy.
"It's a beautiful form of art, the colors and everything," Grijalva said. "It doesn't make it scary."

Dia de los Muertos is not the only commemoration of the dead and their skulls. Stock-tonians drive over another one every day: the Calaveras River.
In 1836 or '37, the pioneer John Marsh (1799-1856), who owned a cattle ranch near Mt. Diablo, was riding with his vaqueros.

Marsh "came upon a place near the Calaveras River where they found a great many skulls and skeletons, and afterward always referred to the place as Calaveras," according to Currey's 1878 "Incidents in California."

The boneyard may have been caused by famine or fight, but most likely was caused by the malarial epidemic introduced in 1832-33 by French Canadian trappers.

The native Americans had no immunity to it.
The river was given a Spanish name because "It was part of Mexico, and Spanish was the official language," said Tod Ruhstaller, the CEO of The Haggin Museum.

Grijalva has set up an ofrenda at The Haggin, by the way.
As further proof of Dia de los Muertos' cross-cultural qualities, sugar skull molds are available at mexicansugarskull.com.