TIJUANA — How Tijuana fought drug violence. The latest trends in online education. The importance of books, of classical music, of citizen engagement. These were just some of the topics that took center stage Tuesday during Tijuana’s third TEDx event. 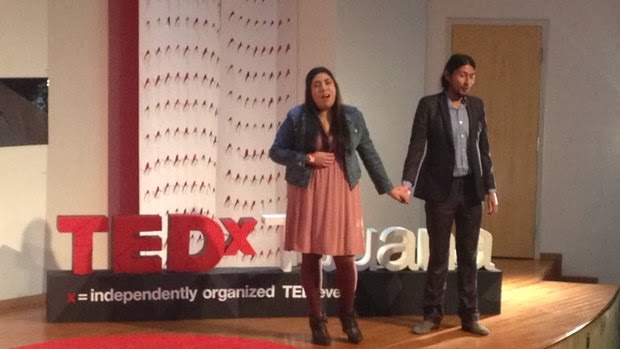 “This is like a storm on the high seas, we are drenched with ideas, with creativity,” said author Daniel Salinas Basave, one of 17 scheduled speakers at the event held on the campus of CETYS Universidad, a private university on a hill overlooking the city.
Among others taking the stage were a promoter of foreign investment, the director of an association for the deaf, and the head of a foundation that supports children with cancer.
TEDx is an independent forum staffed by volunteers that is patterned after TED talks, which feature presentations from three to 18 minutes about “ideas worth spreading.”
First held in 2011, TEDx Tijuana was organized by residents who wanted to spread word about the city’s positive side. “We needed to tell the world that Tijuana has nice things, interesting things, that we have technology, economic development, an interesting gastronomy, a champion sports team,” said Ariosto Manrique, organizer of this year’s event.
The speakers included Gaston Luken Garza, a former federal congressman from Baja California and former citizen-counselor for Mexico’s Federal Electoral Institute, who argued for greater civic particiation.
“We have to participate, we have to become involved in public issues,” agreed Roberto Quijano, a Tijuana attorney, who told of the city’s fight to reduce the wave of murders, kidnappings, and extortions that crested in 2008.
Business groups were key to the effort, he said, as they demanded government accountability. Higher police pay, help from the military, a program that created youth orchestras in the city’s impoverished neighborhoods--all contributed to the effort.
http://www.utsandiego.com/news/2013/nov/12/tijuana-tedx-violence-participation-music/
at 6:43 PM