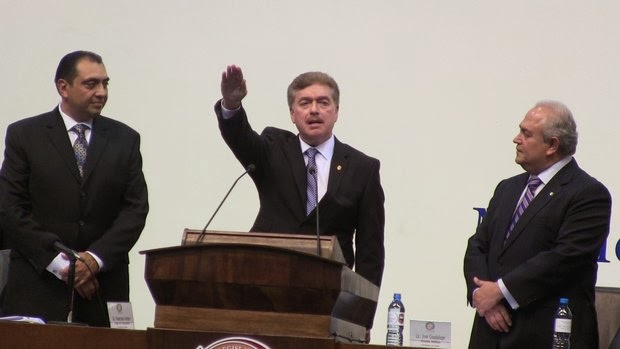 Vega, 58, is the sixth member of Mexico's National Action Party, or PAN, to govern Baja California since 1989. A former Tijuana mayor and state finance secretary, Vega promised a government of austerity in a speech following his swearing-in in Mexicali, the state capital.
"Privileges have ended," Vega said as he addressed a crowd of close to 5,000 gathered for his inauguration in the state auditorium.
Vega said state funds are depleted and cost-cutting measures are necessary, but added that there are no plans for massive layoffs of state employees.
Among other priorities, Vega wants to require English, computer skills and physical education classes for all students. Those from the poorest families will receive free breakfast and uniforms provided through a public-private trust fund, he said, and the state will rehabilitate the most-run down schools. Families that receive assistance from the state will be paid through electronic bank cards for the first time, Vega said.
The new governor also spoke about public safety, saying he will focus on crime prevention through social programs that combat poverty and drug use. Baja California, a state of 3.3 million that continues to draw migrants from poorer regions in Mexico's interior, currently has an employment rate above 6 percent. That’s a relatively high figure compared with rates of a decade ago -- close to 1 percent.
Vega also vowed to fight a sales tax increase of 5 percentage points that’s set to affect Baja California and other border regions starting Jan. 1. The measure, given final approval this week by Mexico’s Senate, would bring the border rate up to the national norm of 16 percent.
Among those attending the inauguration was San Diego interim Mayor Todd Gloria. The event also drew political figures from across Mexico, including the governors of Sonora, Sinaloa, Morelos, Puebla, Guanajuato and Mexico state. Also attending was Gustavo Madero, the national PAN president.