MEXICO CITY — A drought that a government official called the most severe Mexico had ever faced has left two million people without access to water and, coupled with a cold snap, has devastated cropland in nearly half of the country. 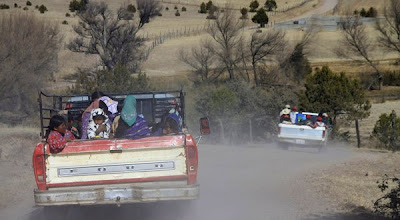 The government in the past week has authorized $2.63 billion in aid, including potable water, food and temporary jobs for the most affected areas, rural communities in 19 of Mexico’s 31 states. But officials warned that no serious relief was expected for at least another five months, when the rainy season typically begins in earnest.
While the authorities say they expect the situation to worsen, one of the five worst-affected states, Zacatecas, got a reprieve on Sunday. Heriberto Félix Guerra, head of the Ministry of Social Development,  saw the rain, the first in 17 months, as a guardedly reassuring sign.
Among the more seriously affected communities are tribal areas of the Tarahumara indigenous community in the Sierra Madre, in the north. Known for endurance running and self-reliance, the Tarahumara are among Mexico’s poorest citizens. When false reports of a mass suicide brought on by hunger surfaced recently, journalists and aid organizations poured in to shed light on the situation.
“I think it has really become extreme poverty,” says Isaac Oxenhaut, national aid coordinator for the Mexican Red Cross. Mr. Oxenhaut recently visited the Indian communities where, he said, the land was too dry to grow any crops the Tarahumara usually depend on for their livelihood. “They don’t have anywhere to harvest absolutely anything,” he added.
Nearly 7 percent of the country’s agricultural land, mostly in the north and center, has suffered total loss, according to Victor Celaya del Toro, director of development studies at the Agriculture Ministry.
The drought, which has been compounded by freezing temperatures, has already pushed up the cost of some produce, including corn and beans. The governor of the Central Bank, Agustín Carstens, speaking last week at the World Economic Forum in Davos, Switzerland, cautioned that it might cause inflation to rise later this year.
But government officials have said they do not expect the price of exports to be affected.
Some of the most devastated areas are hard to reach, slowing the flow of aid to a trickle. The Red Cross is sending 70-pound sacks of rice, beans and sugar, as well as winter clothing.
“A cargo bus will not fit,” Mr. Oxenhaut said. “You have to do it with four-wheel drives or donkeys, or the people who take it on their backs.”
Even illicit crops have suffered in the drought. Pedro Gurrola, army commander in the state of Sinaloa, told reporters on Monday that many marijuana crops had dried up but that the harvest of what remains has continued.
at 12:11 PM