Ancient Mayans from 1,300 years ago may have liked a smoke, it has emerged.
A cask with Mayan hieroglyphics on it saying: “y-otoot ’u-may,” (“the home of its/his/her tobacco) was found in Mexico. 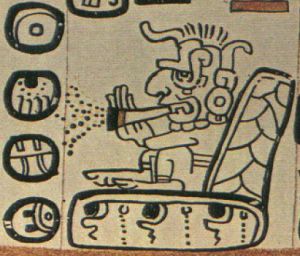 
Nicotine was identified in extracts from one of the 150 vessels in the collection. The flask was made in southern Campeche, Mexico and dates to around 700 AD.
Many of the Mayan flask vessels from the Kislak collection of the Library of Congress were filled with other substances, such as iron oxide used in burial rituals, making it difficult to detect the original content.
The study published in the journal Rapid Communications in Mass Spectrometry.